Looney, Fasano Tackle Tolls, Transit
Paul Bass
Passenger tolls will be off the table for good when the state legislature begins 2020 by revisiting the great unresolved question of 2019: How to pay for a transportation overhaul?
So said the State Senate’s leading Democrat, President Pro Tem Martin Looney, and leading Republican, Minority Leader Len Fasano.
The pair offered listeners a status update on the Great Transportation Fix Quest during a joint appearance Monday on WNHH FM’s “Dateline New Haven.”
Gov. Ned Lamont started the year by calling for highway tolls for both passenger vehicles and trucks in order to fund an overdue $21 billion 10-year rebuilding of roads and bridges and the rail and (allegedly) bus systems. That didn’t fly — in part because only months before he ran for office claiming he would never, ever seek passenger tolls. Just truck tolls.
So Lamont ended his first year without being able to convert his first-year-in-office political capital into passing difficult big legislation. Now, before the calendar gets too near the November elections, Democrats are seeking to pass some form of a transportation plan in a January special session.
Fasano said on “Dateline” that people have lost confidence in government to spend money the way it promises, and therefore won’t trust government to use toll money long-term on transportation rather than divert it to other uses. “The lottery was going to be for education. Casinos were going to be for municipal aid,” he said. “Promises were made that never came true.
Looney embraced Lamont’s latest plan to fund the 10-year transportation plan — now pegged at $19 billion — with the trucks-only tolls on bridges. He argued that a constitutional amendment created a transportation “lockbox” can provide the guarantee needed for toll receipts to be spent as promised.
Fasano said he agrees with the goal of finding the money (he pegged the figure at $18.6 billion) for a 10-year transportation fix. His caucus has produced an alternative plan that avoids any tolls. He noted that Rhode Island passed a trucks-only toll plan — and that is currently mired in a protracted legal challenge. Why pass a plan that might turn out to be illegal and need to be cashiered, he asked? The Republican alternative plan would remove $1.5 billion out of the state’s rainy day fund, use the money to pay off some of the state’s pension debt, then devote the subsequent savings on annual debt service payments to fund the transportation plan.
Looney countered that he believes the Rhode Island plan will survive the court challenge, and argued that it would be a mistake to raid the rainy day fund. The state has worked hard to build that fund back up to 12 percent of the budget; analysts have rewarded the state with ratings upgrades.
“It is important to preserve that rainy day fund until we get to 15 percent,” Looney argued.
The Republican plan has also raised concerns about the state’s ability to address an expected recession in the near future.
Fasano countered that the fund would still have $1.2 billion in it. That’s far more than the state has needed to draw down in past economic downturns, he said. And he predicted that the for self-interested reasons, politicians in Washington will not allow a recession to begin taking hold at least through the 2020 election season.
As Hartford’s top legislative Democrat and Republican, Looney and Fasano have forged a cordial and productive working relationship that stands in contrast to the national political moment. They are able to disagree respectfully, continue to negotiate, and find common ground — especially on health care legislation. They have shepherded to passage bipartisan measures addressing medical office “facility fees” in the past. The two predicted that the 2020 legislative session will see more bipartisan health care legislation. They said they’re open to laws allowing the import of lower-cost prescription drugs from Canada, or instance, and the funding of “navigators” to guide patients through the ever-more-complex health care system.
The senators have played an influential role in the debate over proposed expansion of the runway at Tweed-New Haven Airport. Looney and Fasano represent the sections of New Haven and East Haven, respectively, that house the airport. “There is a path to making Tweed more of a viable airport,” Looney said Monday. For that to happen, he said, Tweed must produce more “community benefits” (like more home soundproofing) for East Shore neighbors and shift its entrance to the East Haven side so travelers would drive there along commercial Hemingway Avenue rather than the residential Annex and Morris Cove. Fasano predicted that a state study will show that it makes more sense to expand commercial service at Sikorsky Airport rather than Tweed. If Tweed is to expand, he said, corporate interests pushing the expansion should foot the bill. “Yale and Yale-New Haven talk about the need for this. They have the money,” he said. “They should put the money where their mouth is.”

The Downtown Highway That Could Drive Hartford’s Comeback
Anthony Flint 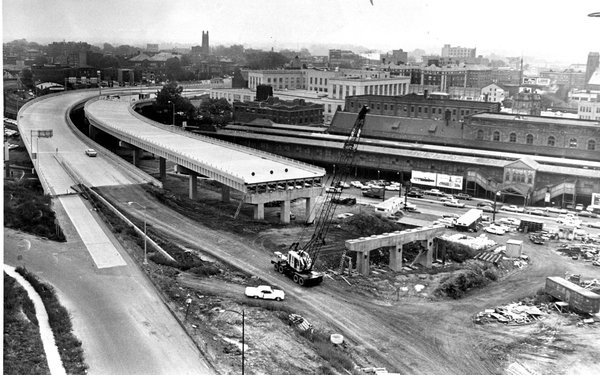 The ‘godfather’ of implant dentistry eyes $20M-plus hotel-event center in Bristol
Greg Bordonaro
Dr. Gerald A. Niznick is considered a pioneer in the dental implant business, but he’s a relatively unknown name in Connecticut.
That could soon change.
Niznick, who by accident became the owner of the city of Bristol’s only hotel, has a grand vision to build a second nearby hotel and an accompanying 35,000-square-foot event center that he says will become a first-class destination wedding venue unlike anything that exists in the state.
“I’d like for this to be a wedding destination where people come from all over the place,” Niznick told Hartford Business Journal in a recent interview. “It will be a hotel, banquet facility and reception hall all in one place.”
Niznick, a Las Vegas multimillionaire with few ties to Connecticut, isn’t just a dreamer with a grand vision. Since 2010, he’s already invested $25 million of his own money to renovate and rebrand the former Clarion Hotel at 42 Century Drive into a 141-room DoubleTree by Hilton.
He plans to invest another $20 million to $25 million to build the event center and a second, 82-room Home2 Suites by Hilton hotel, which is a newer, modern extended-stay brand.
The hotel would connect to the event center and current DoubleTree hotel. There would also be a 400-space underground parking garage.
Niznick said he’s going to pay cash to finance the project so funding is essentially in place. He wants to break ground in May, but he’ll need to go through a city approval process.
Bristol Mayor Ellen Zoppo-Sassu said she supports the project.
Niznick, a 76-year-old serial entrepreneur, recently acquired three long-vacant parcels immediately west of the DoubleTree hotel from Otis Elevator Co., which has a testing and research center in Bristol at 99 Century Dr. That space would be used to house part of the new development, which would extend into the 229 Technology Park, an industrial park whose tenants include Amazon.
Sports broadcast giant ESPN and family theme park Lake Compounce are also located nearby.
Niznick said his DoubleTree hotel hosts a lot of wedding parties but not actual weddings. He wants to capture that business by offering a first-class facility that competes with the likes of the Aqua Turf in Southington and other nearby venues. The hope is that the venue, which would also play host to banquets, corporate and other special events, will feed the hotels and vice versa.
“I’m just betting putting a second hotel there will create a critical mass,” Niznick said.
Zoppo-Sassu said the project was brought to her attention about six months ago and she met Niznick over breakfast at the end of the summer to discuss it.
“I believe [Niznick] sees marketplace demand,” Zoppo-Sassu said. “We have other conference facilities in neighboring cities and towns that take a lot of Bristol business and I think he is looking to fill that market need locally. I also think he is looking around at some of his corporate neighbors and seeing that there is a potential opportunity for them to do additional events in town.”
Zoppo-Sassu said manufacturers in and around the 229 Technology industrial park host events, as does the regional chamber of commerce, that could use the new facility.
Amazon, which has a package-sorting facility in the city, is currently using the DoubleTree hotel for employee training, she said.
“We look forward to any partnership and expansion opportunities that he continues to explore knowing that the end product will be very high quality,” Zoppo-Sassu said.Starting and selling
Niznick was born in Canada, went to dental school to train as a prosthodon
tist and then became a pioneer and serial entrepreneur in the dental implant field, having amassed a few dozen patents and founded and sold multiple companies.
Barron’s magazine once called him the “godfather of American implant dentistry.”
Most notably he started Implant Direct LLC in 2004, a dental implant business that offers a broad range of surgical, prosthetic and regenerative products and services. He said he sold that company for $300 million to a division of industrial conglomerate Danaher Corp.
Niznick is no longer in the dental implant business, but he’s been spending his money on new business ventures.
For example, he now owns Acromil Corp., a California-based aerospace company whose customers include Boeing, Lockheed, Northrop, Kaman Corp. and Barnes Aerospace, according to its website.
“I get into ventures that I like to play at,” said Niznick, who is an aviation buff and has a pilot’s license. “It keeps me busy.”
Niznick had no significant ties to Connecticut but more than a decade ago he said he made a loan to an investor who purchased the Bristol Clarion Hotel, which was built in 1988 and had a troubled history, including falling into foreclosure in 2007.
He says the investor failed to pay him back and he eventually took over the property with plans to sell it, but he couldn’t find a buyer.
“It was such a dump I couldn’t do anything with it,” Niznick said.
So instead, he decided to make it an investment property. It remains the only hotel he owns.
In 2013, the hotel changed flags, converting from a Clarion to a DoubleTree by Hilton, following a 13-month, $20 million makeover.
Niznick said he’s continued to make upgrades to the hotel, and his total investment is up to $25 million.
“It‘s worked out very well — I’m getting a 3 percent return,” he said.
Upgrades to the 141-room hotel, which Niznick said has become a cultural center of Bristol, have included a renovated lobby and a new five-story, 19-suite tower with a separate, private entrance for guests. Elsewhere on the property, two dining areas are available, including The Willows restaurant and TimeOut Sports & Pizza Bar.
His planned Home2 Suites by Hilton would be an extended-stay hotel, which Niznick said is growing in popularity. There is an extended-stay Homewood Suites nearby in Southington that he says is always busy.