The president described the United States as ranked “like 38th in the world in terms of infrastructure, everything from canals to highways to airports.” He said the country must do “everything we can do and we need to do to make ourselves competitive in the 21st century.”

He is expected to provide details for his multitrillion dollar Build Back Better infrastructure program during his State of the Union address on Feb. 23.

While Biden received pushback and criticism from unions for rescinding the Keystone XL oil pipeline’s permit on his first day in office at the cost of thousands of jobs, he will need union support to push through his infrastructure initiative. Similar proposals from former presidents Barack Obama and Donald Trump early in their administrations languished in Congress.

The other labor leaders in the meeting yesterday were:

Other construction-related groups are calling for infrastructure spending that does not necessarily depend on union jobs. For example, the Associated Builders and Contractors sent Biden a letter on Feb. 4 urging him to address a projected $2.6 trillion infrastructure spending deficit by 2029, but to do so without implementing project labor agreements on government projects.

In other labor moves on Wednesday, Biden nominated Jennifer Abruzzo to head the National Labor Relations Board, a federal agency charged with enforcing labor laws and safeguarding workers’ right to organize.

Abruzzo will need to be confirmed by the Senate, and could face a less friendly atmosphere than Transportation Secretary Pete Buttigieg in his own confirmation hearings.

Biden forced out Trump appointee Peter Robb from NLRB last month, even though his tenure was slated to run through November, a move Republicans have sharply criticized.

Democrats have criticized the Trump-era Industry-Recognized Apprenticeship Program as lacking government oversight that ensures proper training, while doing less to make the programs open to minorities and women.

“Industry-recognized apprenticeship programs have fewer quality standards than registered apprenticeship programs,” read a statement on the White House website detailing the proposal. “For example, they fail to require the wage progression that reflects increasing apprentice skills and they lack the standardized training rigor that ensures employers know they are hiring a worker with high-quality training.”

Is This High-Speed Train the First Megaproject of the Biden Era? 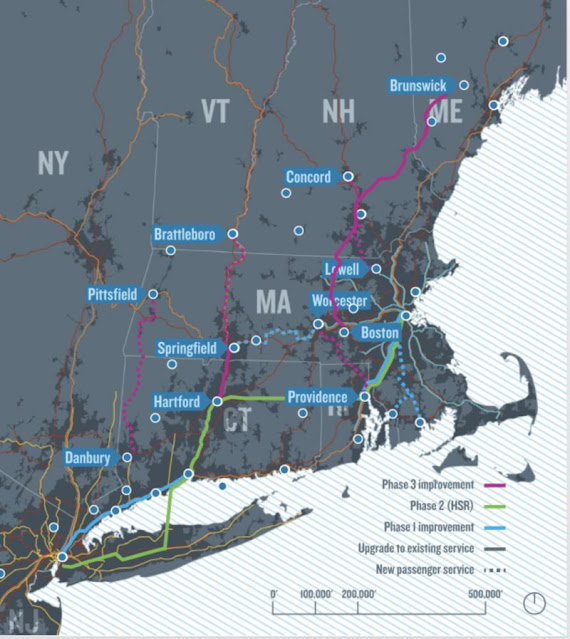 It is an audacious vision for high-speed rail in the Northeast: new tunnels out of New York City and under the Long Island Sound, routing trains up through Hartford, Providence and Boston. With electric locomotives that top 200 miles per hour, travel time between New York and Boston would be slashed to 100 minutes — two hours quicker than current Acela service, the fastest train that Amtrak now runs. Construction would consume 20 years and require building the largest underwater tunnel in North America. The price tag: $105 billion.

Conceived more than a decade ago and launched as a private initiative in 2017, the North Atlantic Railproject looks a lot like the high-speed rail networks that other parts of the world, such as Japan and France, have had for decades. Its backers hope it’s the kind of U.S. megaproject that the federal government is finally ready to pursue.

While politicians on both sides of the aisle have long urged action on America’s aging infrastructure, the administration of President Joe Biden has emphasized important new criteria — that shovel-ready projects also have to be “shovel worthy,” fulfilling equity, environmental justice and climate resilience goals. That means less emphasis on highways and more for projects deemed sustainable in the long term, like rail transit.

The president known as “Amtrak Joe,” who campaigned on a promise to invest up to $2 trillion on 21st-century infrastructure and “spark the second great railroad revolution,” has long been convinced of the virtues of rail. As vice president, Biden was aboard the federal government’s last major effort to bring faster trains to the U.S., a 2009 strategic plan that was a feature of the Obama administration’s stimulus plan. His new transportation secretary, Pete Buttigieg, appears similarly enthusiastic: He recently proclaimed that “I want the U.S. to be leading the world when it comes to access to high-speed rail.”

And so the jockeying has begun among backers of a range of rail projects to demonstrate just how worthy they are. Supporters of the Gateway Program under the Hudson River — a $30 billion plan to repair and upgrade a critical rail link to New York City that was derailed during the Trump administration — expect that this long-planned project will reemerge as a priority. High-speed rail projects in Texas, California, Las Vegas, Cascadia and Florida are also in the mix, and more will surely emerge. But backers of North Atlantic Rail are preparing to make the case that their megaproject “checks all the boxes for a multi-benefit recovery strategy,” according to Scott Wolf, executive director of Grow Smart Rhode Island, another NAR partner.

The pitch is that NAR would benefit not only New York City and Boston, but the places in between — the left-behind, post-industrial legacy cities scattered across New England. Faster, climate-friendly intercity rail could transform cities such as Hartford, for example, into more attractive options for post-Covid Boston- or New York-based office workers required to be at headquarters less often. The same is true for the ancillary improvements that are part of the envisioned NAR network: The project’s third and final phase would add or upgrade passenger service to smaller cities in Massachusetts, Vermont, New Hampshire, and Maine, turning much of New England into one giant, rail-based commuter shed.

“It would unlock economic opportunity and spur growth for dozens of mid-sized cities throughout New England, connecting the entire region in one integrated market for ideas, labor and innovation,” said Hartford Mayor Luke Bronin, who co-chairs the North Atlantic Rail initiative. “And it would be a meaningful piece of a serious climate agenda.”

A modernized rail network would benefit business travelers making the Boston-New York trip, “but also low-income minority workers in Chelsea and Lynn, or along the Fairmont corridor in Dorchester, or folks in rural Rhode Island,” said Jarred Johnson, from the Boston-based advocacy group TransitMatters. The project could include Brownfields remediation and other clean-up efforts, new stations with bicycle and pedestrian infrastructure to improve access, affordable housing near the stations, and requirements that operators offer low-income fares, he said.

NAR is also seen as a climate resilience measure, its backers say: Stretches of the current Northeast Corridor route will face chronic flooding from rising oceans in the coming years, according to a 2017 study. Building an inland alternative to the shoreline tracks would provide much-needed redundancy.

And yet, the sticker shock remains. Even among other U.S. high-speed rail projects, the $105 billion cost estimate for NAR stands out. The Texas high-speed rail network from Dallas to Houston, a public-private partnership using the same technology as the Shinkansen trains in Japan, is estimated to be $20 billion. The Cascadiaproject in the Pacific Northwest, which would link Portland, Seattle and Vancouver with high-speed trains, could cost up to $42 billion. Estimated costs for California’s embattled L.A.-to-S.F. bullet train — the lone U.S. high-speed rail project that is under construction — have risen to $80 billion, but the service is a long way from reaching either city.

The best comparison for North Atlantic Rail may be the plan on which it is partially modeled: the HS2project in the U.K., which involves extending high-speed rail to post-industrial cities in the north as part of the Northern Powerhouseinitiative. Now pegged at $138 billion, that effort is moving ahead despite resistance from foes worried about environmental impacts, who predict that demand for post-pandemic travel will decline overall anyway.

Part of the reason North Atlantic Rail is estimated to cost $105 billion is the engineering feats that will have to be accomplished in a densely developed area: a new tunnel from Pennsylvania Station under the East River, more tunneling and cut-and-cover construction through Queens and Long Island, and then a 16-mile tunnel bored beneath the Long Island Sound. The project makes use of existing rights-of-way from the New Haven area to Hartford, but then requires yet another tunnel under Hartford, new tracks through environmentally sensitive areas in eastern Connecticut, and still another tunnel — the North-South Rail Link — under the “Big Dig” in Boston, to connect to modernized tracks heading to Boston’s northern suburbs, New Hampshire and Maine. Other branches of the network will require track modifications, straightening and electrification.

“People shiver and roll their eyes when we talk about the Long Island Sound tunnel, but around the world there are a hundred of these kinds of projects over the last 20 years or so, using tunnel-boring technology,” said Robert D. Yaro, president emeritus of the Regional Plan Association and a member of the NAR steering committee. “We fill potholes,” said Yaro, who first worked on the North Atlantic Rail proposal 10 years ago in a studio at the University of Pennsylvania. “The rest of the world is building tunnels.”

NAR will surely face skeptics — and not only the usual critics of high-speed rail who decry the per-mile cost as absurdly exorbitant. Last week, Democratic U.S. Senator Richard Blumenthal of Connecticut told CBS/AP the project was both potentially environmentally damaging and very likely lowballed, even with its fulsome 12-figure sum.

Such dissent notwithstanding, the NAR coalition is banking on support from lawmakers and business leaders in the New York-New England megaregion, a $3 trillion economy that represents 14% of overall U.S. GDP, on par with California, and 11% of the U.S. population. Yaro argues that NAR’s costs aren’t out of line with the economic returns the rail network will deliver throughout downstate New York and New England, both through construction jobs and increased economic activity. Comparing this moment to the New Deal of the 1930s, he also points out that even building out all three phrases of the network is a mere 5% of Biden’s $2 trillion commitment. “This is a once-in-a-lifetime opportunity to do big things.”

Bronin, the Hartford mayor, has a similarly sweeping pitch. “In this country, which built the transcontinental railroad and the interstate highway system, we’ve forgotten what it means to think big and be bold when it comes to infrastructure investment,” he said. “Projects like this might have seemed futuristic or pie-in-the-sky 30 years ago, but at this point, dozens of industrialized nations have completed projects as ambitious if not more ambitious than this.”

It’s an open question whether that argument — making major infrastructure investments for future economic growth and competitiveness — will be convincing enough to overcome concerns about spending, especially after the extensive federal outlays to respond to the pandemic. In some quarters there will be little appetite for spending so much on the Northeast. The weeks and months ahead will reveal just how much inclination there is to go this big.